After replying to an advert while involved in a crocodile farm in Chiredzi, in the South Eastern Lowveld of Zimbabwe, we found ourselves accepted for the position on offer and on board a plane headed for a safari and crocodile farming company based in Zambia on the edge of Lake Tanganyika. Very remote, and very beautiful, it was extremely popular with fishermen who came from all over the world.

The lodge afforded wonderful views of the lake including the magnificent mountains and one in particular, Kapembwa, thought to have magical powers.  Those passing by on boats were obliged to throw loose change into the water in order that they would not be cursed with bad luck by the spirit. 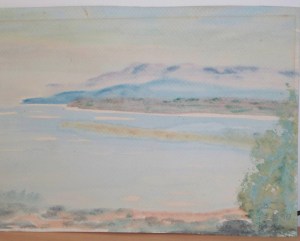 My painting of Kapembwa

Our house was a large, stone building under thatch at the water’s edge, some two kilometres from the lodge itself. We would mostly have our meals at the lodge and since transport for my husband was not yet available, we were allocated the 25 seater tourist bus for our journeys to and fro. This was quite bizarre, just the two of us in this huge bus trundling through the bush twice a day.

The lake itself was quite mercurial: sometimes as smooth as glass, with not a ripple, at others dangerously rough with high waves and strong winds.  Trips across the lake were undertaken nervously (by me at least) as the experienced skippers were always on the lookout for the different winds that could suddenly whip up and there would be a quick turn-around and a rush back to the base and safety.    They were rarely wrong and we could only greatly respect their knowledge and experience.  Each kind of wind had a name: Chimbambura – a northerly wind that brought the rain.  Kaskas – a very rough and dangerous westerly wind.  When this was seen to be about to descend upon the lake a hasty retreat back to shore was in order, no messing about.   Kapata – the prevailing south-easterly wind.

Each fisherman’s catch would be gutted and de-scaled at the edge of the jetty and this meant  it was surrounded by very large crocodiles waiting to feast on this easily accessible nourishment.  Astonishingly, we sometimes saw people having a dip right there and how no one was taken was a mystery.

At the lodge itself, the elephants would come and eat the seeds from the faiderbia albida tree growing in the centre of the large patio in front of the dining room.  They also would raid the dustbins outside the kitchen.

One night I was woken by the sound of elephants and went out onto the patio, and witnessed a strange ritual.  From there I could see many elephants walking down to the lake’s edge.  Some of them entered the lake at knee height and all began to move around in a circle, making no noise at all.  Then I saw two males peel off from the group and move away inland, past me, and head towards thick bush.  The circular movement at the lake edge continued and then I could hear the males screaming and trumpeting from within the trees.  Soon, a female from the circulating group moved away and followed the path the males had taken into the bush.   The others stopped moving in the water, and began to disperse in the opposite direction. I have presumed that the female joined the males in order to matebut I have told this event to a various people experienced with elephants but they have no idea what this might have been all about. 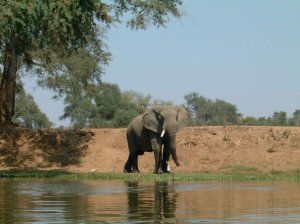 Sometimes during the evening elephants would come right up to our house veranda and rub themselves on the wall.  I had tried to plant Bougainvillea and they were doing quite well, but became part of the elephants’ diet.  We had acquired two cats.  The smell of their food attracted hyenas, and we often heard them sniffing and bumping vigorously against the kitchen door trying to get in.

Apart from the mosquitoes, of course, another undesirable feature of the lake was the  chironomid midges.  Just before dusk they would arise from the lake in their millions, in great swarms almost resembling a thick mist, emitting a high pitched whining noise.  Putting on our lights attracted them into the house and despite closing all windows and doors they found their way in somehow, perhaps where the ceiling boards were not quite attached to the walls.  They would whine around our heads and at our ears and we found it almost unbearable, and certainly we were not able to sit up for long.  I eventually put up mosquito nets over the armchairs under which we could sit and read, but the only real relief was when we went to bed and put out the lights.  By morning there was no sign of them until dusk came upon us that evening.   Another irritation was the presence of tsetse flies, but fortunately these were not too common and we rarely received an attack from their piercing proboscis.

Unfortunately, my husband began to get ever more frequently occurring attacks of malaria and this was badly affecting his general health, and so we took the reluctant decision to leave Lake Tanganyika but we will always remember its magical beauty.