We left Chipinda Pools with great sadness in our hearts and after two days in Salisbury (at that time the capital of Rhodesia)  we made our way north to Kariba.  About ten kilometres before the village itself which is situated at the top of the hill, we turned off onto a narrow dirt road and eventually, with the magnificent sight of the lake ahead of us, we came to our new home.  As we drew up to the back door we were surprised to see  a Landrover parked under what passed for a garage (four poles, no sides, thatched roof) and there, piled up in a muddled heap outside of that structure, were all our wordly, though sparse,  possessions, open to the elements.   To our surprise, Alan and Evelyn had obviously not yet moved to their new post elsewhere in the country.  They came out to greet us and Alan quickly moved his Landrover to make room for our furniture and boxes which were then covered by a tarpaulin as the thatching wasn’t rain proof.   They had not been expecting us for another two days.

Their two daughters were away at boarding school which left young Sean at home.  He was lively little lad and  one breakfast time suddenly piped up  “Why does Uncle Peter put kakkies on his food?”  This was in reference to a popular brown sauce that goes well with bacon and eggs.  There was some spluttering and embarrassment and admonishing but we have laughed about it ever since.

Alan and Evelyn were transferred two weeks later and we were then able to move our modest and sparse effects in the large house.  A big improvement when compared with the size of the pondokkie (small house) we had at Chipinda Pools.  Three large bedrooms, a bathroom and kitchen with (thank goodness) running water, a combined sitting/dining room, and a large verandah surrounding the whole structure.  But, no electricity and no ceilings, which meant we  looked up at the corrugated iron roof, complete with stout wooden beams and the odd bat hanging therefrom twitching and watching us.  During the rains, we couldn’t hear ourselves speak for the drumming and clattering of the raindrops on the corrugated iron roof.   From the verandah, steps led into the garden and the view of the lake  with the Matusadona Hills on the horizon was stunning.

The dam wall had been completed, but there were still a few contractors living on the hill who were soon due to leave. This proved fortunate for us as we were able to buy a complete household of furniture (well-used but presentable) for the princley sum of thirty pounds.

In the meantime, Peter had been instructed to introduce himself to Rupert Fothergill, the leader of the world-renowned Operation Noah, where animals were rescued from the islands that had formed but which were rapidly becoming submerged due to the rising of the lake.     Peter’s task was to collect blood from the rescued animals which was to be tested to see if they were carrying trypanasomiasis, a protozoa that causes sleeping sickness in both animals and humans.

Kariba was always hot and we would sit in the evenings once the sun had gone down, Tilley lamps hissing away adding to the heat. 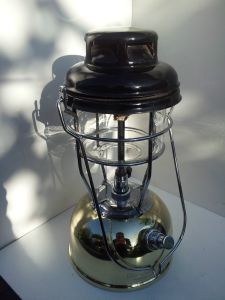 As we heard the eerie call of hyena  or  the odd roar of a lion  our dogs  would bark  excitedly, wanting to get out to chase.    But, when it came to the cough of a leopard  prowling near the house, they would cower next to us ears flat, quite subdued.

There was small general store up the hill in the Kariba village that sold a limited range of groceries and so we would send by post each month an order to Boffs in Salisbury.  The supplies would be delivered by lorry to our back door and this arrangement worked very well for us and others in the district.  I always added a tin of Bird’s custard powder to each order, but for some reason on one occasion I decided to order two tins, but then on reflection changed my mind, crossed out the two and wrote one.  The order duly arrived and I began unpacking.  All the usual items, jams, flour, toilet articles, margarine, food for the dogs, and even including eggs, which although we had no fridge, only the deepfrezer, always seemed to stay fresh over the following weeks.  Opening the second cardboard box I was absolutely taken aback to see not one tin of custard but 12!  It seemed the figure two on my order had not been crossed out too well and  the quantity  appeared as 12. Over the next few weeks I was handing out  tins of custard to anyone who would take them.

Our chest deepfreeze was a Zero model and worked with paraffin and a wick.  You filled the tank with paraffin, slid it into place under the deepfreeze, lifted the protective glass and lit the wick with a match. You then lowered the glass back into position, and turned a knob which moved the wick up or down until the flame was low and burned blue only.  All this undertaken while on your knees, or even lying flat on your stomach.  If you couldn’t get a pure blue, low flame it meant that the unit wasn’t level and the freezer would not freeze.   This involved getting the spirit level and attempting to shuffle the freezer around,  or tearing up pieces of cardboard to place under the freezer legs until a satisfactory level of levelness was achieved.  The whole process was very frustrating and you ended up dirty, and smelly with paraffin and soot from the wick all over you.  It was very susceptible to any drafts also, and on several occasions the smell of rotting meat alerted us to the fact that the flame had been blown out.

And, once again, we had a wood-burning Dover stove in the kitchen.  This together with the heat that stays with you all year round at Kariba, and an uninsulated ceiling made the house extremely hot.  There was, however, a substantial pantry with shelves! 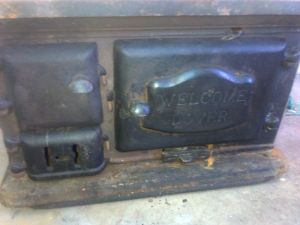 There was a further improvement  with regard to our bath water.  Outside the kitchen  there was a  tank  regularly filled from the lake via a diesel pump,  and under this tank was a space for a fire which was kept burning with huge logs from early morning until nightfall, thus ensuring a regular supply of hot water.   We had all that we needed.